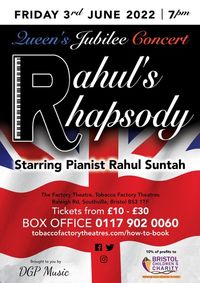 We are delighted to welcome Rahul Suntah to the stage.

Originally from Mauritius, now based in the UK, Rahul is an incredible pianist who uses more than just the keys of the piano. Join him at this concert to watch him play his original compositions as well as his amazing piano covers of popular hits.

Classically trained, Rahul started learning the piano at the age of 8 and pursued his university studies in Audio & Music Technology at the University of the West of England, Bristol and a masters in Film music at the University of Bristol. Since then he has attracted over 40,000 followers online and garnered over a million total views on YouTube after posting breathtaking piano covers of popular hits and releasing his debut EP ‘Piano Stories’, alongside winning the UWE Bristol Talent Show and being featured on popular platforms such as Music Crowns, BBC, ITV, Right This Minute and Pianist Magazine.

In addition to being an aspiring film composer, Rahul is a unique versatile musician and performer known online for his track ‘Paradise Island’, which was among the top tracks of 2021 on BBC Introducing.

10% of profits from this show will be going to the Bristol Children’s Charity.